GET A FEEL FOR THE ASPHALT!

We drive over Belate, the doorway to the Pyrenees, to then drive a winding road down to the sea, before heading back to the Navarrese mountains, ending the route in Pamplona.

Set off from the Villava petrol station with a full tank and, with your partial odometer on zero, we start on this route that will take you to the coast of Guipuzkoa through the north of Navarra.

Touching the petrol station there’s a yellow milestone indicating the NA-2517 road. This stretch is short and soon the road changes to the N-121A. After a curve to the left, you’ll enter a roundabout which is also the end of this leg. 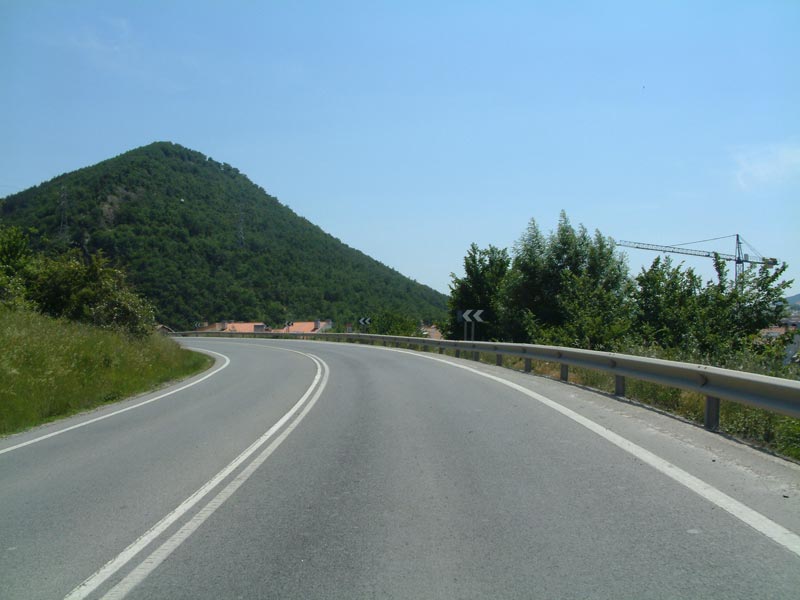 We take the left exit at the roundabout onto a wide road with good surface, and with a slow lane for slow traffic on the uphill.

Towns such as Ostiz and Olague will be left behind as we go through the Ultzama valley until, on reaching milepost 27 we take the exit onto the NA-1210 to avoid the tunnels, and proceed with the ascent of the Belate pass. 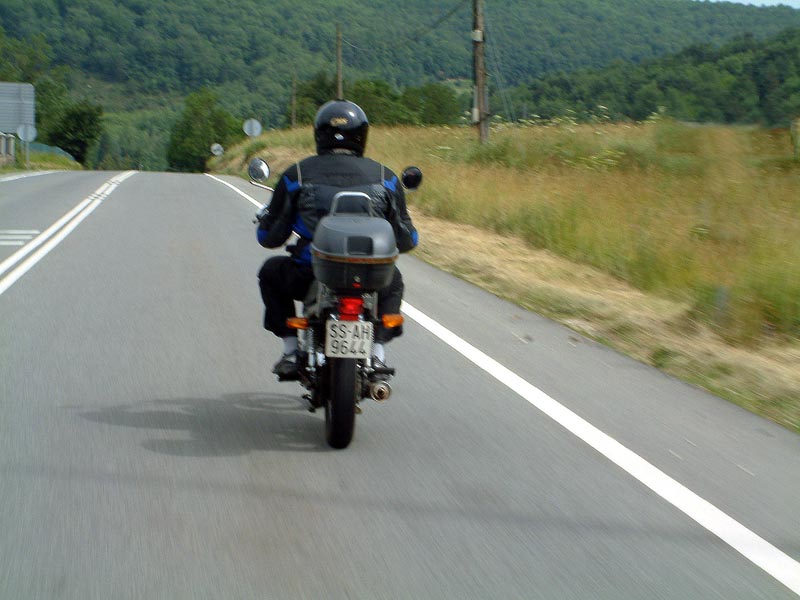 The pass consists of 12km of bends with abundant vegetation on either side of the road. The road is not used much, and is ideal for biking as it has the width of a National road but with the bends and lack of traffic of a country road. 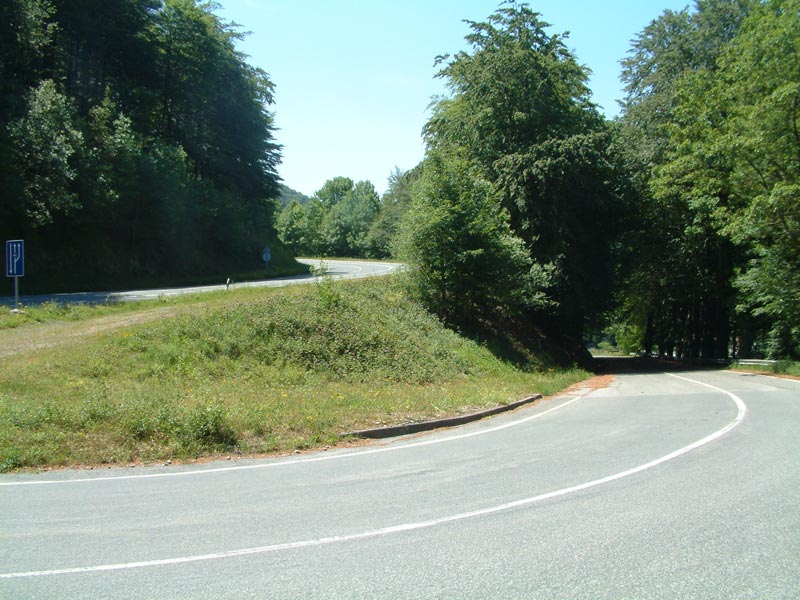 We stay on the NA-121A, going through towns such as Doneztebe / Santesteban, Oronoz Mugaire, and others where we can take a break and have something to eat while admiring the beauty of the region of Baztan Bidasoa.

After 62km travelled partly alongside the Bidasoa river, we will reach a turnoff on the left onto the NA-4000 heading towards Lesaka. 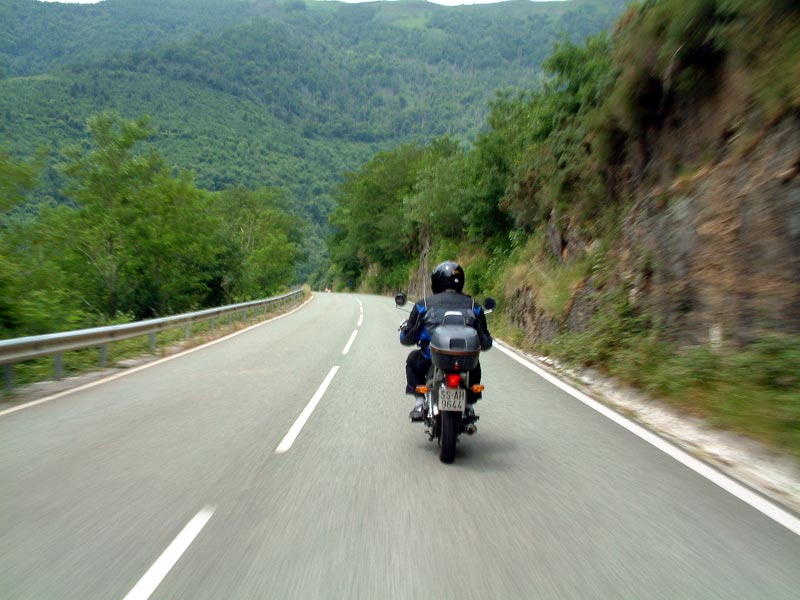 We reach lovely Lesaka, after which we start climbing on good though narrow tarmac, full of curves, some of which have been banked to make driving easier. There’s so much high vegetation that at some points the foliage won’t let us see the sky.

On reaching milepost 15 we’ll find the San Antón dam, which we’ll drive through only to start driving uphill again, for 3.5km, till we reach Guipuzkoa.

At the top of this stretch we’ll drive through a narrow tunnel about 300m long which takes us into Guipuzcoa. 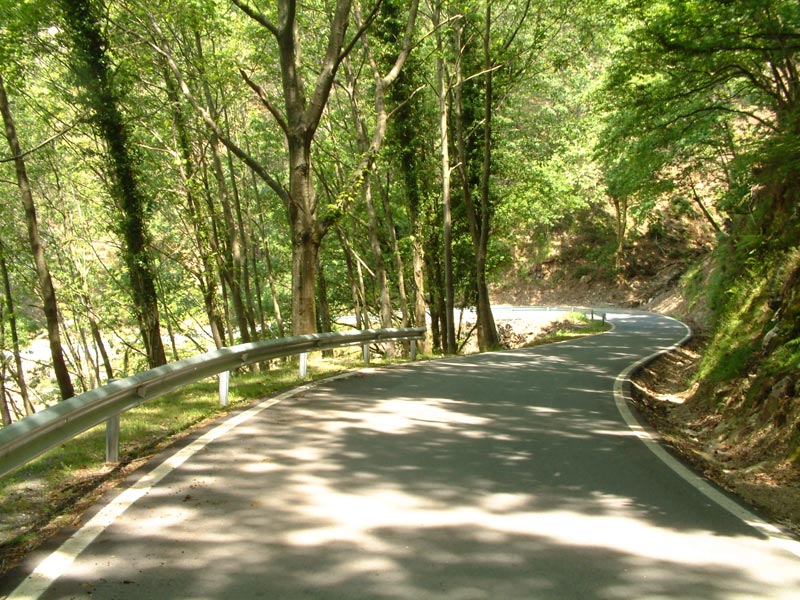 Upon leaving the tunnel, we’ll find perfect tarmac leading us into the Las Peñas de Aya natural park and we’ll drive downhill for a good while, finding lots of curves in plentiful greenery.

Once down the road widens progressively and we’ll go trough the place where the Roman Mines of Arditurry, on the way to Oiartzun (Oiasso in Roman times). 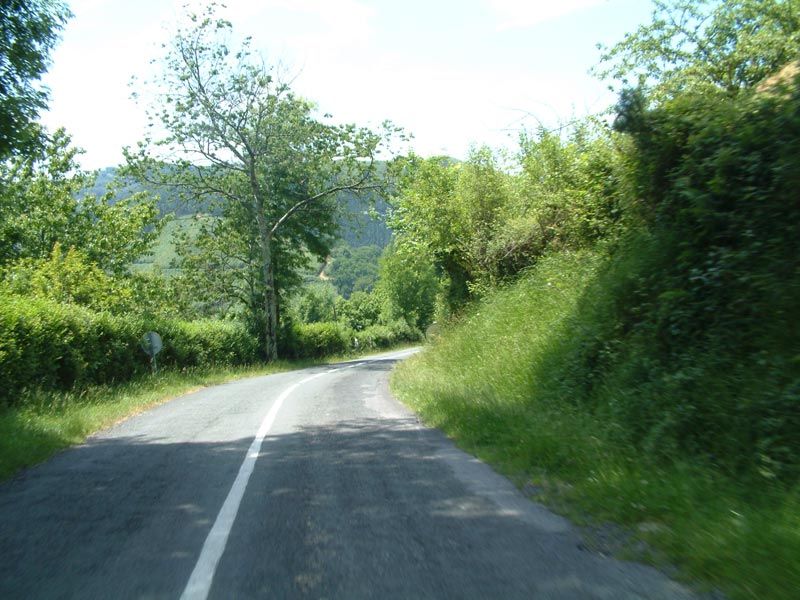 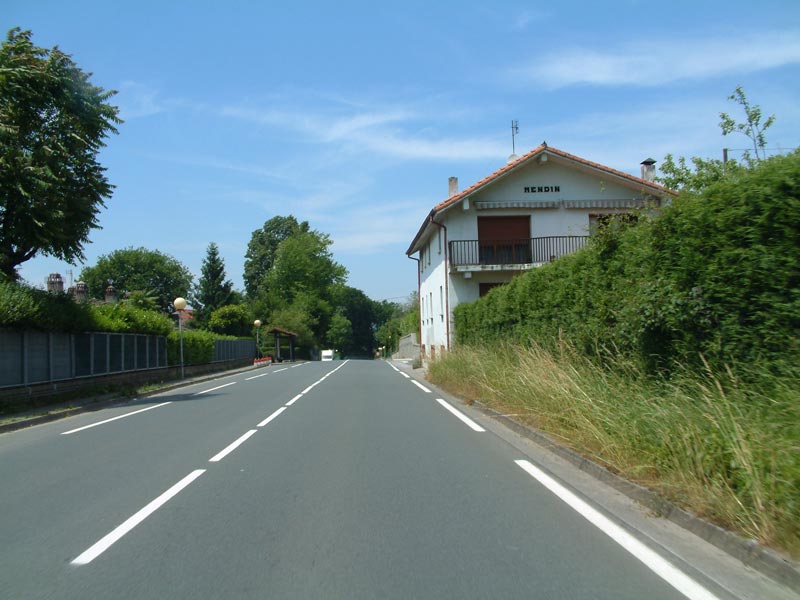 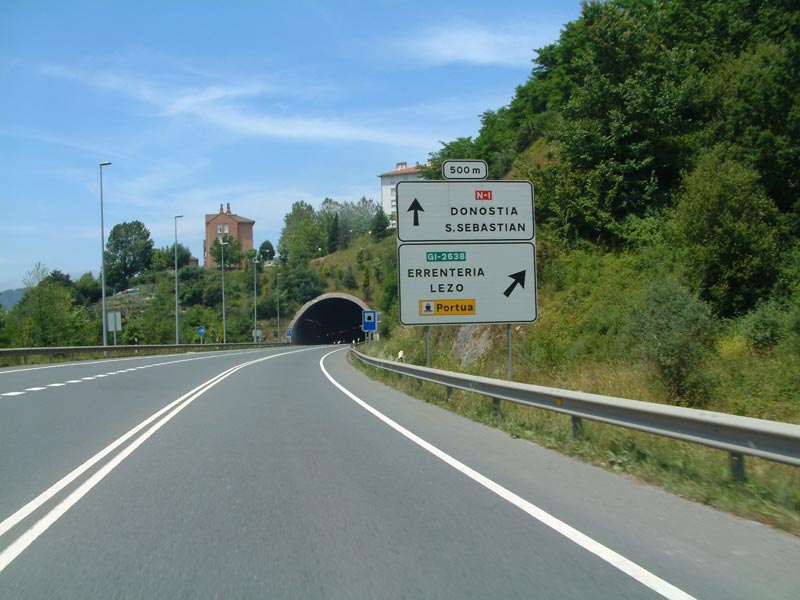 The exit towards Loiola is the start of the GI-131 road that will take us to Hernani. It’s worth mentioning that this road is also named GI-2132, so keep calm if you see green signs with this on them.

We will drive through the adjacent towns of Loiola and Martutene, and continue on a good wide road with quite a bit of traffic on it to the town of Hernani.

Upon leaving Hernani, a roundabout will indicate the GI-3410 towards Goizueta. 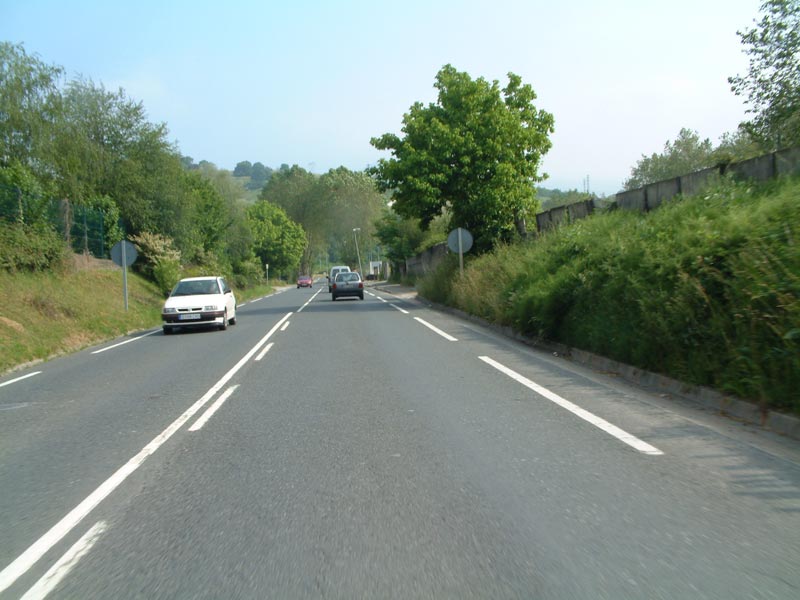 We drive parallel to the Urumea river on a road with good surface for 40km. Along this stretch we will find picnic areas on the side of the road, great for a break if needed.

Along the banks of the river we can see old stone buildings, which were probably used to use water power for industrial activities.

Be careful and keep an eye out for cyclists who frequent this stretch, as they also like the not-too-tight  zigzagging curves on this road. 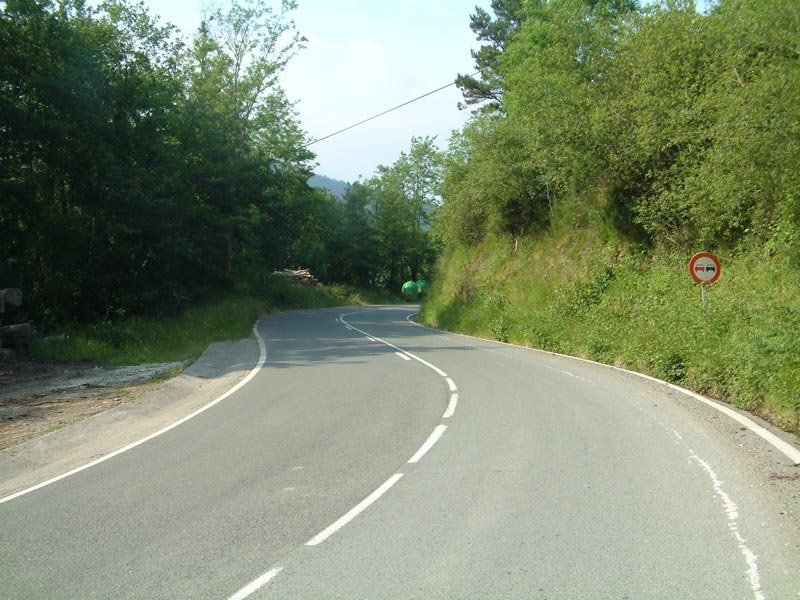 We enter into Navarra and start an ascent while still following the Urumea river. This is a narrow road full of curves and bends, uphill, and surrounded by thick foliage.

As well as the aforementioned stone buildings we can see “caserios señoriales” (big Basque manor houses) and we will be able to make out some stone towers through the foliage, now in disuse but likely once used for storing grain or other goods.

A slight incline takes us to Goizueta and its narrow streets. The uphill grows steeper until we are about 800m above sea level, and we will be able to see some hydroelectric power plants.

Then we will come to a t-junction opposite the Basa Kabi hotel. 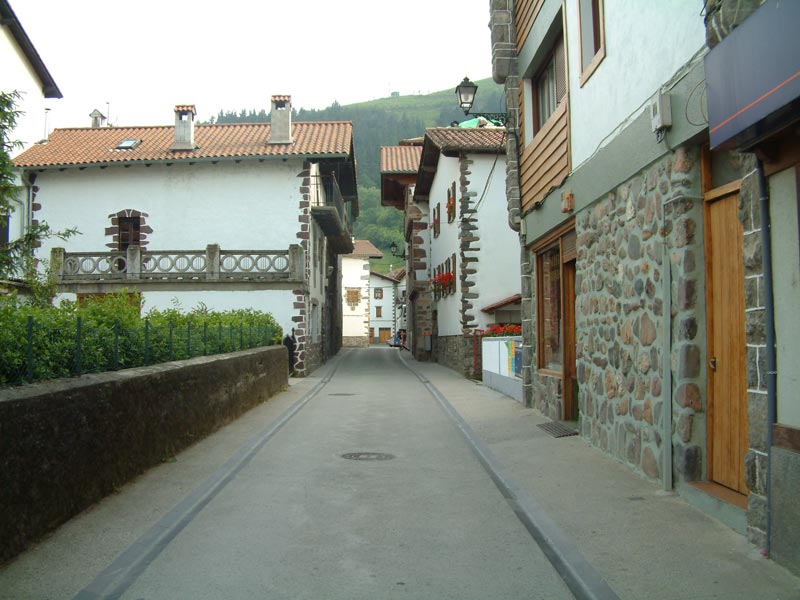 Once past the hotel we start teh descent on a wide road, well kept, and with some tight bends, which takes us to Leitza.

We will drive through this town until we reach a roundabout just beside a petrol station, where we start the new leg. 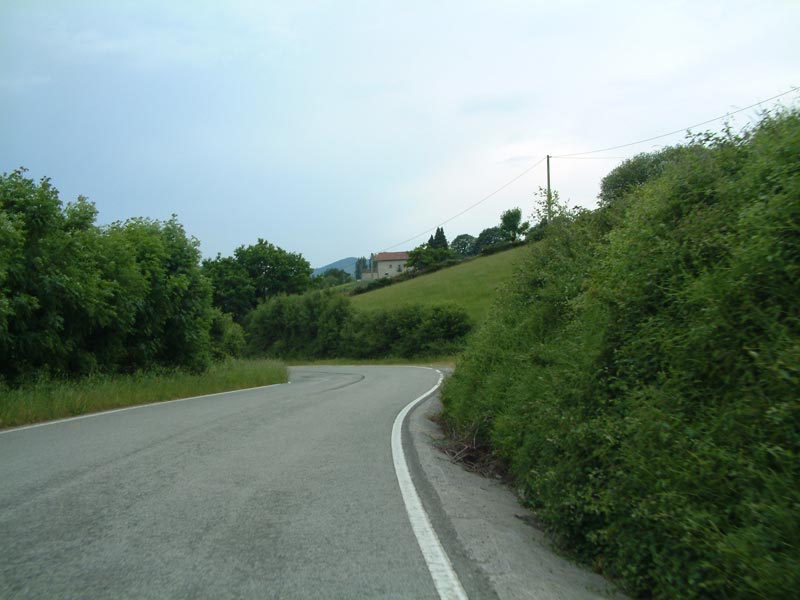 The 11km separating the towns of Leitza and Lekunberri are on a well-kept wide fast stretch with some curves. It rises to the Uitzi high point to then go down until you reach Larraun and then there’s a level stretch to Lekunberri.

There are some “caserios” to be admired as you drive past, but beware! You may find cattle grazing on the sides of the road. 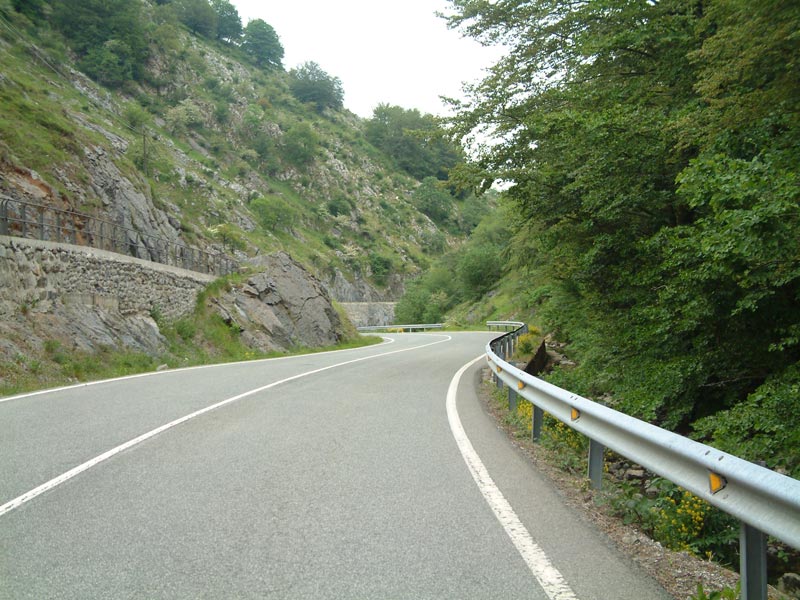 Whether or not you decide to visit the town of Lekunberri, we will leave it by taking the A-15 which we will stay on until we reach Irurtzun by taking exit 113, passing through the Dos Hermanas (two sisters) mountain crags which stand imposingly on either side of the dual carriageway. 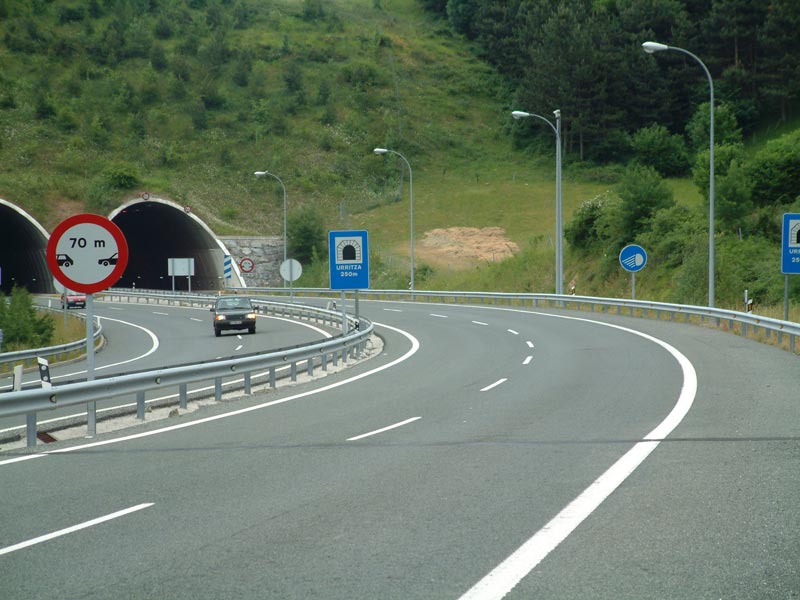 Once through Irurtzun we continue on the N-240A on a short rise and fall until we join the traffic leading to Pamplona on this not-too-busy national road. The last stretch of this leg is a long straight stretch that takes us to the end of this route. 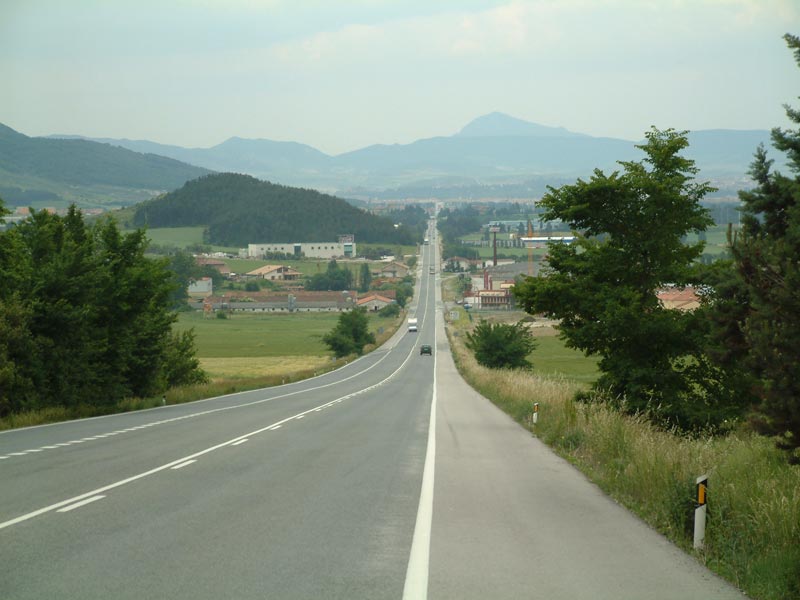