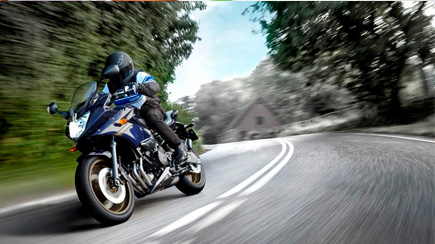 A lot of riding, the Navarre Circuit, the longest zip wire slide in Europe ... 3 days at full throttle through Navarre

Enjoy three whole days of adventure on two wheels throughout Navarre, biking through places as charming as the Señorío de Bertiz Nature Park, the Peñas de Aya Nature Park and the Roncal Valley.

Add a touch of adventure, visiting Irisarri Land with the longest zip wire slide in Europe and put your foot full down on the accelerator on the Navarre Circuit.

Including visits to historical, landmark places such as the Palacio Real de Olite, the walled enclosure of Artajona, with the opportunity to sample the excellent cuisine of Navarre and to stay at places with charm.

10:00: departure from the hotel with a full tank.
We'll leave Pamplona northwards on the national highway and, after some ten kilometres, the road leads upwards to the Belate mountain pass, continuing on to the Baztan valley to finally reach the Señorío de Bertiz Nature Park. After riding 103 kms, we'll come to the Irisarri Land adventure park, featuring the longest zip wire slide in Europe (900 metres long).

14:30: lunch at Irisarri Land.
Degustation of a typical Navarre menu in the former Irisarri palace, which has now been converted into a hotel of charm.

16:00: Departure from Irisarri Land.
We'll leave the park northwards, going into the province of Guipuúzcoa along some winding roads. We'll start the return journey to Pamplona up a winding road leading to Goizueta, alongside the Urumea river. There we'll make a stop for something to eat and drink and stretch our legs. Then we'll carry on upwards a little longer and , after a descent, we'll reach Letiza, followed by Lekunberri, Irurtzun and finally Pamplona.

10:00: departure from the hotel with a full tank.
We'll ride westwards, going up the mountain pass of Etxauri, with bends and beautiful scenery. After passing alongside the Alloz reservoir, we'll carry on towards Estella and then go up the slopes of the Urbasa mountains, as far as Larraona, where we'll stop for a snack.

11:30: snack in Larraona
We'll then continue westwards, going into the province of Alava and, once at Arraia-Maeztu, we'll turn southwards towards Viana, where we'll stop for lunch after a short stroll through the town's medieval streets.

16:00: departure from Viana
After 25 kilometres of nice bends, we'll reach the Navarre Circuit, located in the town of Los Arcos.

16:30: arrival at the Navarre Circuit.
There, we'll all take part in a track day and have a drink at the circuit bar.

18:00: departure from the Circuit of Los Arcos
We'll leave the circuit and drive down the former national highway to Pamplona, passing through towns such as Estella and Puente la Reina.

10:00: departure from the hotel with a full tank.
We'll leave Pamplona with a full tank, this time going eastwards. We'll pass through Abaurrea Alta, the highest village in Navarre and go through the Roncal Valley towards Burgui, where we'll stop for a snack.

12:00: snack in Burgui
Then we'll carry on to Javier, skirting the Yesa Reservoir, with many bends along the way.

16:00: departure from Javier.
After lunch, we'll continue along the route westwards, passing through Sangüesa, San Martín de Unx, Tafalla and Artajona, a town where we'll make a stop to stretch our legs and admire the town's beautiful and strategically located Walled Settlement.

18:00: stop at Artajona and tour of the Walled Settlement.

We hope you enjoy this experience!
The Navarider team